Yesterday, a colleague at work asked me “Bloody hell Rebecca, can’t you stay in the UK for more than 5 minutes?” It would appear the answer is “No”, as I now find myself onboard BA flight 2584 to Venice.

Beside me is my best mate, Sarah; who I’ve managed to kidnap from the realms of a husband and three adorable children, left to field for themselves for the next three days.

Due to collect Sarah at 8.15 last night, we started tweeting around 8ish about our packing abilities, with such hash tags as #stillpacking #notusedtocolddestinations #rubbishatpackinglight #havingabootmare and #flipflopsoptional

Only an hour late, I pull up outside Sarah’s house, put her luggage in the boot (note: her case is smaller than mine, yet she claims to have brought more?! She’s good at this!) and teach her eldest (my godson) to say “ciao ciao”. Then in true Thelma & Louise fashion, we’re onto the highway and away into the night…

Well, not quite. Susan Sarandon and Geena Davis enjoyed a Wild Turkey straight up, the grand canyon, and Brad Pitt wearing nothing but 501s, a cowboy hat and a hair drier, screaming “take me, break me, make me mad…” We endured a can of red bull, packet of percy pigs, series of lane closures, and a’workforce in road’ wearing high vis jackets and a transit van. Lovely.

We arrive at Gatwick’s Premier Inn around midnight, nail a nightcap of Twinings’ best, before falling into bed in our pjs. It’s rock n roll people, trust me.

Whilst this jetsetter lifestyle is one I’m loving in my mid-thirties, my glands are telling me I need sleep. So as we don’t fly until 12, I’m thinking no alarm required! Sarah’s body clock, on the other hand, is accustomed to the care of her brood, who are usually running her ragged by this time. So we’re up and out by 9am, in a mission to shop… (No, we haven’t got to the airport yet.)

So here’s my bad… (is that right? Trying to be ‘street’ is always risky, especially for me, what I mean is ‘here’s my confession’ but I may have done the whole bad thing very badly?… I’ll get my coat.) So having monitored the weather forecast daily, knowing we’re going to Italy, had an email from my papa telling us it’s wall-to-wall sunshine in Venice this weekend, and tweeted Sarah #dontforgetyourshades, yes you guessed it. I forgot my shades. Audrey Hepburn would be turning in her grave that my Prada classics are still at home. So first stop this morning is shade shopping. But in double quick time, I have two new pairs (one’s never enough) and were heading for the North Terminal.

A cheeky breakfast later, courtesy of Jamie’s Italian, and we’re heading down to the gate. On route, we talk about the distinct lack of holiday-makers; especially missing those wearing shell suits, who’d already have consumed 5 pints, probably of vodka, because they can, because they’re on holiday, off to Magaluf, probably, and who’d undoubted come home, in March, in single-digit temperatures, wearing flip-flops, shorts, a vest top and sunburn. Instead, we’re being followed by two chaps in dark suits, captains hats and stripes on their arms. Now it may be a cliche, and Leonardo di Caprio in Catch me if you can has much to answer for, but there’s something about a pilot in uniform which is just fine. Sarah and I giggle like schoolgirls at whether they could be flying our plane today. We clock one of their badges – BA’s Scott Allen looks awfully young, maybe he’s a cabin attendant? We descend the escalator, Scott and Leo follow. We turn towards gate 104, so do the chaps. Blimey, are they old enough to be in charge?

Whilst we’re pondering whether we’re actually old enough to be their aunts, further entertainment is simmering behind us. A lady travelling alone, we’ll call her Gaga, is on the phone, and desperately trying to convince the person on the other end, that she didn’t hang up on them. After the third time, each repetition growing in volume, I think gates 101-113 are convinced she hadn’t hung up, but she seems determined to tell us, regardless. Mild amusement but of little significance… until we got to the runway. At this point, engines roaring, ready to start our take off run, I suddenly ask myself, why the cabin crew haven’t yet taken their seats for take off? It would appear that Gaga, now seated about five rows in front of us, is still on her phone. But this time, she seems in some distress. The kind BA lady (let’s call her Annie) is telling her that Emergency Services are on their way, and they can handle it. But no; on her feet and trying to retrieve her case from the overhead locker, Gaga wants to get off. (Given that we’re miles from the terminal, and sitting on a runway, I’m not quite sure how she plans to escape?)

Well I’ve no idea what Annie said to Gaga… (all I can think of is the scene on Airplane!, where there’s a queue of passengers waiting to calm an agitated woman, the queue including a Russian with a pistol and a nun with a baseball bat!) …but it worked, as Leo comes over the tannoy with Cabin crew, seats for take off please and our big bird lifts us off into the blue. 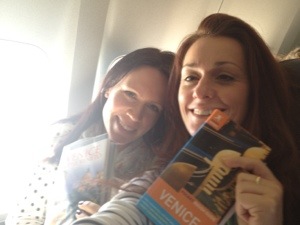 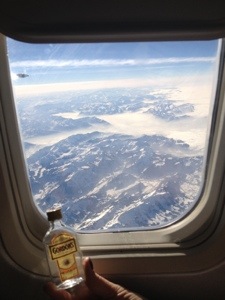