Ok so up front clarity: I was born and brought up in Constable country, Suffolk. I live in York now and think its one of the nicest places anyone could live. There.

So, I’m sitting in departures at Leeds Bradford International Airport and I’m chuckling.

Firstly, I don’t recognise it: it’s not just had a paint job but a complete redesign! Much better. So why have they done this? Let me describe LBIA and all may become clear.

Even in today’s global society, they still feel the need to include the word ‘International’ in the name. Prior to the upgrade, the airport was like a shed in a farmer’s field, on a windy hill overlooking Leeds to the south and Bradford to the west. The duty free naturally included alcohol and the bar took up 60% of the space in the departure lounge. WHSmith had an outlet but hardly a flagship store. To get to the planes, you walk out of Safestyle UK’s best conservatory doors (think these were on BOGOF from the pilot’s brother-in-law) and literally wander across the Tarmac to the bird. In warmer climes this is nothing significant but in typical west Yorkshire weather, it’s a long way from the Gatwick shuttle!

Then there are the passengers.

Sitting in my seat under the departures board, I have a prime view of pretty much everyone. But first to catch my eye is Nora. I’d say in her mid fourties, Nora is being pushed around in a courtesy wheelchair by another lass who seems a few years her junior. Now it’s not the chair which draws my attention to Nora, it’s the eloquent articulation of her disappointment at being delayed. With enough volume to ensure the captain of her pending plane could her hear from the Tarmac, Nora declares “ah fa fooks seak, the’ never flamin well go on’t raght time d’the ? Raght tek me back t’ut baar luv” (it’s 08:15) and her driver shuttles her away, to more mutters of “fa fooks seak”.

Then there’s Elvis. If anyone ever wonders if Elvis really is still alive, visit Leeds Bradford and you’re bound to find him. Generally he’ll be at the bar, surrounded by guys wearing matching attire, each with a designated role in the group. There’s the chap wearing an almanac – I’m guessing he’s timekeeper? Another is faffing with 8 pieces of paper, lists and looks generally confused – I’m guessing he’s the best man in (questionable) control of the itinerary. The rest are queuing for the bar and checking out the group of girls opposite.

The girls are loud, very loud! Periodic shrieks (much to annoyance of the couple across the way, who are trying to catch up on their sleep) and shouts of “Mica’s gonna be ratted by’t time w’get there, wohoooo!” They wear matching blue t-shirts adorned with the phrase “Lose women, Benidorm June 2012” and one (Mixa?) is wearing a glittery tutu.

Desperate to hide my chuckles and get some work done before I fly, I keep my head down, accrue $5k, raise a PO and book a supplier to deliver some Prince2 training in London for Q3.

Ah we’re boarding, excellent, bang on time. So far, Ryanair, so good. Did I just use the words Ryanair and good in the same sentence? Blimey.

Ok, new airport layout, gate 5, where’s that? Previously, departures was so small, it was like walking across the living room to get to any gate. But now I can’t even see the runway? And I’m upstairs? Aha, signage, and whilst I’m disappointed it doesn’t read “t’ut gates” it’s clearly telling me to go that way. So, down the escalator, ok. Right, this brings me into the old departures – the living room – and gate 5 is where it used to be. But I now have to climb a staircase again? Ok, up I go, through where they tear your boarding card in half (with little care, making it illegible!) but then, guess what, another flight of stairs back down? All this in the space of 50feet? Welcome to Yorkshire! We then head out of the Safestyle conservatory doors onto a car par, oh hang on, no it’s a plane park. And ours obviously arrived last as it’s parked at the far end. Gutted. So in sub zero wind and driving rain, we walk half way down the runway to our bird and wait whilst they jump up & down on the metal stairs to make sure they’re safe *gulp*.

Luckily, I’m near the front of the queue so one of the first to board. I get on board and the attendant tells me to pick a seat. Hang on, when I checked in online, Ryanair gave me the option to pick my seat? I chose not to pay the extra £10 as I’m travelling alone as I do, but god help those who did, complete con!

As we board from the back of the plane, I pick seat 29F and watch as everyone else traipse by. And we have another hen party on board – I count 7 blondes, all in their mid twenties I’d say, wearing black boob tubes with “Nat’s Benidorm 2012” on the front and “Not another hen do!” on the back (is this for the benefit of the hens’ bank managers’ or the inhabitants of Benidorm? Who knows.)

Finally we take off, to shrieks from the Lose Women, no noise from Nat’s team (who still seem to be faffing with their hair) and whines from
Elvis that he needs a wee-wee… This could be an amusing 2.5 hours!

I’d forgotten people clap when Ryanair flights land! And the fanfare they play over the tangy, haha! 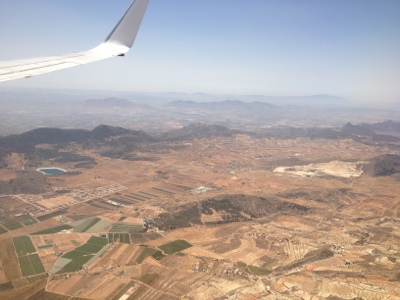 One thought on “Yorkshire Airlines”