Do things really change, or is it just our perception of them that changes?

Some people say, the only thing you can guarantee is change. I guess, by this, they mean you can be pretty sure that tomorrow things will look quite different to how they look today. So why is it, when I go to places I haven’t been to in a long time, they seem to be just the same as they were?

Years ago, when I could actually handle a long night out (without either falling asleep, having to change into flat shoes, or deciding I was far too old to be in a particular establishment), I occasionally ventured into one of York’s delectable nightclubs. For those who know York, this was generally Toffs (now called Tru, I believe?) or Silks (now called the Gallery, unless it’s changed its name again?). In both cases, before I was legally allowed in, they seemed great. However, as soon as I turned 18, they started to become less inviting, to the degree that eventually, I only went to remind myself why I hadn’t been for years… sticky floors, dipping ceilings, terrible music and over-priced drinks, let alone the fact that everyone was under age (think I may have answered my first question already?…)

In tonight’s case, it was the delight that is, Easingwold…

AN: At this point, I’ll repeat the disclaimer on my “About me” page and say that, in my blog, I’ll say what I honestly think. In this case, I strongly suspect others will be thinking the same, but who knows.

…so Easingwold. Situated about 12 miles North of York, this pretty Georgian Market town would appear, to passing tourists, to be a lovely, quaint place, with a green, a market place, a golf club, a few pubs and a takeaway. Indeed, when I moved there in 1989, there were 8 pubs (enough to do ‘the Easingwold gallon’) and by the time I left in 2005, there were also 3 supermarkets, 3 banks, 2 Chinese takeaways, 3 Indians, a pizza / kebab shop and an espresso bar. There were also a handful of Estate Agents, as Easingwold had suddenly become the most desirable place to live in North Yorkshire, apparently. 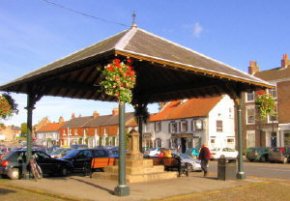 However, over the last few years I was there, I felt a change in the feel of the place. The once thriving pubs were declining in trade, to the degree that 8 became 6, of which 2 or 3 had their regulars and the rest opened the doors and hoped. Those out in the evenings seemed more interested in having a go at each other, than a good time. And there were often blue flashing lights driving around. Not the nicest place to be out at night and, what used to feel like a picturesque little town with a status quo of youngsters, families and those in retirement, seemed to have become a place where you watched your back after dark, if you hung out with the wrong crowd. This could just be a sign of youthful ignorance maturing, or just generally changing times, but by the time I left, I couldn’t wait to see the back of it.

On the few occasions I’ve been back to ‘the Wold’ or ‘the Beck’ as it was known, it doesn’t seem to have changed much. I can walk into some pubs and pretty much guarantee there will be person X, sitting in seat Y, drinking Z. Beside them will be A, probably with B, and almost certainly talking about C. And it feels like this hasn’t changed in 7 years.

So if change is pretty much guaranteed, how do they manage to still live the same life, doing the same thing(s), with the same people, for so many years? Do they not get bored? Do they not want to know what’s beyond the A19? I actually met one chap in Easingwold, who’d never been further afield than York, no really; he was in his thirties.

Perhaps I’m basing this theory on familiarity – if I go back to the ‘Wold, and walk into a pub, of course it’s going to feel the same as it did; it won’t have changed layout or moved from one side of the market place to the other, so it’s obviously going to feel the same. But I don’t get this feeling when I go to my grandparents’ old house, or when I visit Suffolk – on the contrary, I think ‘blimey, this place has changed’. But those are places I loved when I left, I never wanted to leave, and always love to go back to. I’m disappointed that they’re not exactly as they were when I left, perhaps subconsciously trying to tell myself I missed something, like it was wrong to leave. Whereas I couldn’t wait to leave Easingwold, I didn’t like it there in the end, so when I go back maybe I convince myself it hasn’t changed, just to reassure myself I made the right decision in leaving.

Who knows. But tonight I left Easingwold, in my car, sober, pleased to be coming home, and reminding myself why it’s been ages since I was there. I don’t like it any more. I don’t fit in there anymore. And I’m pleased not to be there anymore. Anyone reading this who is still there – if it suits you then great. But it’s not for me.

You could ask the same question of people, couldn’t you? How many times have you heard yourself say “s/he isn’t the person s/he used to be” or “s/he changed”? Maybe s/he is still the same person, you just know them better; they might not have changed, it’s just your view or perception of them which has changed. But that’s a whole different discussion!

Do things really change, or is it just our perception of them that changes?