So, the cars. Heading down through the casino gardens (tactically keeping my head down past the Häagen Dazs boutique this time) we arrive in the main casino square. On one side, there’s Café de Paris, with umpteen seats outside, populated by those who aren’t especially car mad, but want to be part of the wealthiest action in town (as it always was, traditionally). Their pleasure? A car park view of Ferraris, Porsches, Rolls Royces, and the odd Audi RS8 thrown into the mix. Amusingly for me, the popularity of the Fezzas makes them seem common – the easy choice for the rich buyer, just pick a number (458, 355, F40 etc) and pick your colour (black or red). I’ve only seen one yellow one (my preference, if I was to buy one) and that was in the showroom at the dealership down the road! 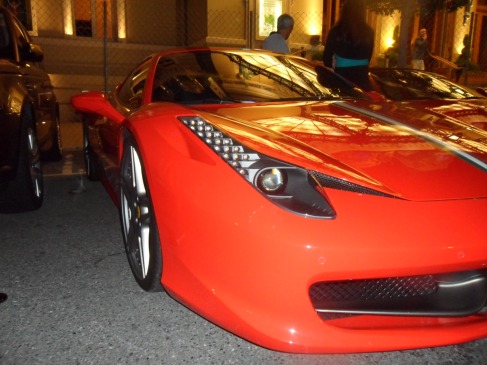 Similarly, there are a lot of Rolls Royces – mostly in white – which seem to be the next step up from the playboy’s Ferrari; seemingly driven (more often than not) by an older chap with his jewellery-clad lady sitting beside him.

But the excitement, for me, always comes in the beauty (and unmistakeable sound) of the Lamborghini – ideally a Gallardo, but I’d settle for a Murcialago if push came to shove. So far, I’ve seen just one of each, so clearly the more discerning driver’s choice – one who goes for something beyond the obvious choice of a prancing horse, and opts for a flamenco of Spanish extravagance instead. This is, I kid myself, is demonstrated by their rarity in an environment such as this, I mean even the Bugatti Veron is more common (we’ve seen two of those!) Call me crazy, deranged or whatever you like, but I like Lambos, that’s all! (I blame the opening sequence of Cannonball Run…)

So next, to food; and we opt for a steak at the TipTop bar. I’d never heard of it before, but I’m told it’s the place to be – right on the pavement beside the circuit, opposite the Rolex boutique, on the exit of the casino square (which is remarkably round for a square?) It’s a great place – small and typically French, with a huge wooden bar dominating the interior, dark brown wooden round tables and chairs, red and white paper serviettes, a simple menu, lots of dusty bottles of wine knocking about, and it’s heaving, serving those in the know with good food, wine and beer (whilst the tourists queue for Café de Paris). For those in (or familiar with) York; TipTop is the like old Oscars (before it moved) whilst Café de Paris is Betty’s.

The steak is simple but amazing; a chunk of perfectly-cooked meat, with a peppercorn sauce, and a plate (not bowl) or frites (not chips) on the side. The drinks are simple but spot on – gin & tonic, where the gin is served over ice in the glass and, because there are two of us, the tonic comes in a glass jug, for us to add at our leisure. Simply obvious when you think about it, saves a fortune in glass recycling and avoids having to go with a particular branded tonic (saving the vendor his margin) whilst appealing to the tourists as being typically French. I like. 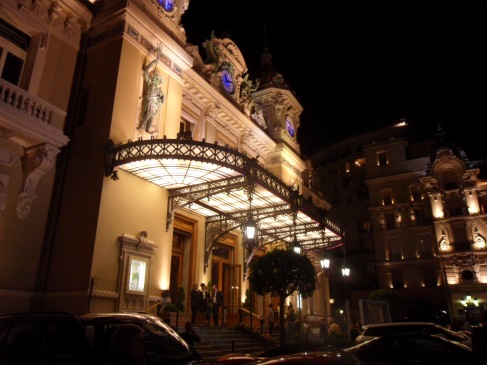 So after a great feed and some nods to other members of the paddock who pass by*, we leave casino square and wander down towards the harbour. And as we turn every corner, and another nautical metre of water (and boat) appears, the “oh my god” comments start to get so boring and repetitive, that I zip it and just make a mental note instead: “Close your mouth please Michael, we are not a goldfish…”

(*I’m completely oblivious to this by the way; rather than getting star struck, I just become ‘numptified’ by the razzmatazz of being here, I completely miss the fact that my host knows half the city’s occupants this week and is intermittently nodding and saying Hi to random strangers…!)

As we approach the harbour, the ambience changes completely. The population gets younger. The music gets louder and faster. The bars get brighter and more neon-lit. The girls wear less (intentionally and otherwise). The men get more drunk. This is the modern side of Monaco then, I guess? I always thought the money was ploughed into rooms at Hotel de Paris (where I saw Sir Jackie Stewart a moment ago, wandering through reception with his holdall! Brilliant!), where the staff wear uniform suits with hats marked “Voiturier” and entertainment comes in the form of the world famous casino. But as much (if not more) wealth now appears to be floated in boats bigger than the QE2, owned by race team bosses who just happen to also own one of the world’s largest breweries. The yachts really are huuuuuge. And the parties they host are loud and in demand… although, I’ve since heard from one of the race engineers, that once you’re on board, you forget you’re on a boat in Monaco and it’s just like a club (I bet he’s never been to Toffs though, right?!) Nevertheless, everyone wants to be here. Average age? I’d say 35. Average income? Onshore I’d say around £40k, offshore I’d say about £400k. This is the stretch of the circuit running down to the swimming pool towards Rascasse and, at night it’s like a clubber’s paradise.

In contrast to the traditional tourist up at the casino, the clientele down at the harbour is very different. It’s a mixture of younger F1 fans, just excited to be in Monaco; Made in Chelsea rejects, who are just here for the glitz; and the pit lane boys who are letting their hair down and, out of hours, are no different to your average mechanic working in the local garage.

It’s a giggle drinking with these boys… they’re all half cut, curious who I am (random bird drinking pints with a pit crew?!) and are a real mixed bunch – there’s the truck driver from Stobart’s, the lubes man from Petronas, the fuel man (who’s equivalent was the chap injured in the Williams garage in Barcelona), the gas man, the bolties (mechanics) and Nico’s car manager – this guy just has the little job of being responsible for everything which goes on, off, in, or out of Nico’s F1 car. So not much responsibility there then, only he looks about 24! I’m told he’s a bit older than that, has a wealth of experience, and is damn good at his job, but I can’t get over how young he looks! Career, nailed, good work! We then bump into Sam Bird, the Mercedes reserve driver, who smells like he’s wearing a duty free shop (luckily it wasn’t the Old Spice counter). In fairness though, he smiles as we walk past and says Hi, seems just a normal chap. (At this point, I’ll point out that I’m typing this whilst watching the Formula Renault race and Sam is currently in P1… this is his day job I guess? The likelihood of either Nico or Schumi being poorly sick and unable to race in F1, is so slim, that his role as reserve driver is perhaps more an indication of his potential and skill, rather than a realistic necessity for the team)). We see Sam again as we get home and he has a brief chat. Nice chap.

So, a night out with the bolties, a chat with a real driver, and an audience with Sir Jackie Stewart’s holdall – quite a good night then, really!