30 jagerbombs and a bed full of sesame seeds

I’d planned to do very little last weekend. The sun was forecast and I intended to spend Saturday lying in another of London’s parks, and Sunday preparing for Budapest.

Since when did I ever do very little? It didn’t happen.

The fun begins when I get a text from a friend who lives in Dubai, saying he’s in London on Saturday, if I’m around? This particular friend is of the rugby fraternity, meaning alcohol is bound to be involved somewhere, and most likely in large quantities.

I am not disappointed. We arrange to meet at the 8 Bells at lunchtime. Great, I can nip up to the West End to return those bits I bought 4 weeks ago and haven’t yet managed to take back. Perfect. So I pack my bag full of returns and head for the pub.

Cash. Hmm, will the pub take plastic? Most in London do, but rather than get caught short in discover otherwise, I first head in the other direction to the cashpoint. Luckily, James and Jo are still in their previous establishment, so his brief text of “running late, with you shortly” turns into “sod it, meet us here as we’re still drinking”.

Between then and midnight, our challenge of ‘doing pubs you’ve never been in before’ is an obvious winner… Really? I’ve only lived here a few months, why did I think this would be a good idea? Seven pubs later, said the Putney challenge takes us way beyond sobority and the following morning’s text of “the last pub’s tab alone included 30 Jagerbombs” pretty much sums up the proceedings.

I wake up Sunday morning, accompanied by an empty Pad Thai box and a bed full of sesame seeds… lovely. Needless to say, I now feel even more like doing very little. 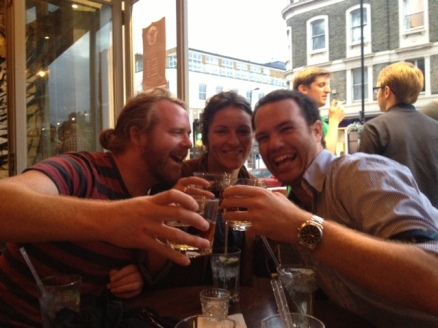 The Wind in the Willows

That’s until I get a text from Oxfordshire, simply saying “On the river again, if you fancy cruising?” A day on a boat, undoubtedly drinking, in the sunshine… Tough call… I’m in – what’s the plan, Stan? Unfortunately for me, Stan’s plan means I need to arrive in Didcot at the same time as another friend who’s also boat-bound. Only, said friend arrives at 10:55. And what time is it now? 10:30. And another Anneka Rice style dash is on – start the clock…

Showered, changed, and desperately trying to forget what I drank last night, I’m running across Paddington to make the 11:36. I make it at 11:29, impressed, knackered – stop the clock!

Where the hell is platform 13? About as far from the main concourse as possible, with the exception (you’d think) of platform 14, which actually turns out to be closer than 13. Either way, I’m running. Again. Still trying desperately to ignore the hangover and hope there’s somewhere on platform 13 to buy a bottle of Evian. There isn’t. But I get a seat, on the 11:40 to Oxford, stopping at Ealing Broadway, Slough, Maidenhead, Maidenhead plus a bit further, Maidenhead’s outer suburbs… getting into Didcot Parkway a good half hour after the 12:04. At this point, with a hangover, who’s run half way across London, without finding a bottle of water, not having had breakfast, and knowing the lift from Didcot to Sutton will have gone, so a taxi will be needed, eating into any beer funds for the day, I could be getting slightly frustrated. But I soon reach Didcot, hail a cab, and head for the George in Sutton Courtenay. In glorious sunshine, I plonk myself on a bench outside, with an ice cold Crabbies, open my Budapest Rough Guide and read. Paul and Gareth soon arrive and we head for the boat.

AN: given there are two of them, and lock keepers at each stop, I consider it acceptable to play lady muck – that’s fair, right? So I bask in the sun doing nothing but keep refreshed 😉

We sail down to the next pub, to meet Debs and the girls. Rude not to sample a swift half whilst we wait, right? Agreed. They join us for a half before we set off to meet Simon at the next pub. Simon has a long boat called Charlie. And it’s beautiful. And best admired from the riverbank, where we enjoy the delights of the beer garden before heading up the road for some lunch. Once back aboard, we return Gareth, Debs and the girls to their car at the Plough, sample a swift one, and head back to Sutton.

Unfortunately, by this time, the lock keepers have shut-up shop and left the boats to man the locks themselves. So in the dark, lit by little more than head torches, we set about Culham lock. At this point, I still have hope and intention of making the last train back to London. However, 40 minutes later, and the lock is still filling up, my outlook changes to contingency measures. Right, if we get back to Sutton, we’re guaranteed a mooring overnight. From there, I can get a cab to pick me up first thing, to take me to Didcot to meet the first train back to town, plan.

If Carlsberg did Anneka Rice… perhaps best not think about that…?

Well it would’ve been, except the local taxis are clearly not short of business, and thus unwilling to get up at 5am. Bugger. Luckily, a friend in Sutton does the station run every morning, as she works in the city. So I hail a lift and make the 6:41 to Paddington. This is like doing the walk of shame, only I’m not guilty, I look respectable and I’m actually heading to the same place as most of my fellow commuters! The only difference (other than the fact that they’re all in suits and I’m in shorts, shirt and Pradas) is that my commute this morning needs to go via Putney to change and grab my ID pass! Start the clock…

I don’t know about Anneka, but by 9:45 I could have murdered a Carlsberg!

So another weekend doing nothing, yet I still haven’t managed to get my returns back to the West End and haven’t planned or packed for Budapest yet. I do love living life to the full.